Home > Achievements as Member of Parliament

Some of the achievements of Sh. Satya Pal Jain as MP.
(Tenure as Member of Parliament: May,1996 to June,1999)
Chandigarh-Ludhiana Railway Link got approved:
This new railway line would connect Chandigarh with Ludhiana and would provide the much needed direct connection between Chandigarh and the cities of Punjab. This project was approved by Central Government during the tenure of Mr. Satya Pal Jain as MP. The work is currently in progress. Once completed, it…

New long distant trains to Mumbai, Howrah and Chennai have been introduced after these new facilities became available

When Mr. Satya Pal Jain was elected Member of Parliament from Chandigarh, …

Click here for the official website of Government Medical College & Hospital, Chandigarh
Four Laning of Chandigarh-Ambala Road got approved:
This project was approved by the Central Government and the ‘Bhumi pujan’ was performed by Sh. B C Khanduri, Union Minister for Surface Transport on 17 February, 2004 in the presence of Shri Satya Pal Jain and other dignitaries at Zirakpur.
27 September, 2003- Minister’s assurance on City-Ambala highway
18 February, 2004- City-Ambala 4-laning to cost Rs 190 cr
18 February, 2004- Four-laning of Ambala road by 2006
Chandigarh Doordarshan Kendra established at Chandigarh:
The construction of Chandigarh Doordarshan Kendra was approved and started during the tenure of Mr. Satya Pal Jain. Smt. Sushma Swaraj (Union Minister for Information & Broadcasting) accompanied by Mr. Satya Pal Jain, Mr. B K Dey (Engineer-in-Chief, Doordarshan) and other senior functionaries of Doordarshan, performed ‘Bhoomi Pujan’ on 24th July, 1998. It was inaugurated by her on 28th April, 2001. It is the first centre in the country providing services to private producers.
25 July, 1998- Sushma echoes concern on cultural pollution
25 July, 1998- Sushma gifts relay centre with DD studio
15 January, 2001- DD Relay Centre in Sec 37 soon
29 April, 2001- City Gets DD Centre
Elevated highway from Transport Chowk to Panchkula

An elevated highway from Transport Chowk to Panchkula was approved by the Central Government during his tenure.

The Central Government Health Scheme (CGHS) Dispensary was opened in Sector 45, Chandigarh during his tenure as MP.

During his tenure, the waiting Lists for Gas & Telephone Connections were done away with and they were made available on demand.

Additional Room in Backyard of Houses

The provision of building an additional room in the backyard of houses in Chandigarh was approved during his tenure.

The people living outside ‘Lal Dora’ were provided with Water and Electricity connections during his tenure as MP.

Member of Parliament Local Area Development Scheme
Comprehensive utilisation of MPLADS has been one of the big achievements of Sh. Satya Pal Jain. It was for the first time that so much development was done under MPLADS in Chandigarh. Infact, Sh. Satya Pal Jain is the first MP from Chandigarh to fully utilize MPLADS Funds received during tenure (utilizing Rs. 99,99,815 out of Rs 1,00,00,000 allotted during his tenure as MP from 1996-98).

[Before this, Rs. 1.17 crore remained unutilized out of the 2.05 crore allotted to the previous MP (Mr. Pawan Kumar Bansal of Indian National Congress)].

A total of 234 projectswere recommended by Mr. Satya Pal Jain for implementation under MPLADS.

The 101 approved projects covered various development activities all over the city: 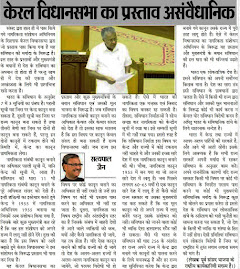 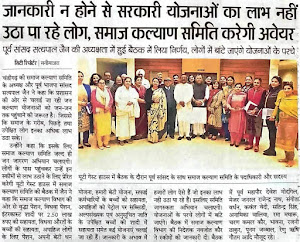 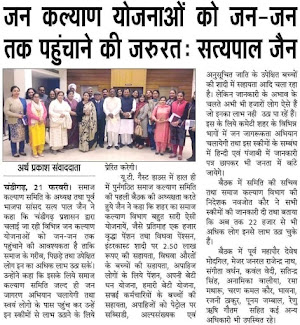 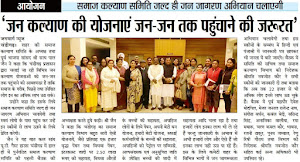 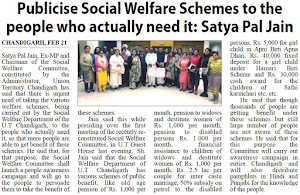