Chandigarh, popularly known as ‘the City Beautiful’, was planned by the famous French architect Le Corbusier and his team in the years succeeding independence. Located just at the foothills of the Shivaliks, Chandigarh came to be known for its urban planning and modern architecture in the twentieth century India. The City derives its name from “Chandi Mandir”, the temple of Goddess ‘Chandi’, located in its vicinity and the fort of ‘garh’ situated beyond the Chandi temple.

Originally planned for a population of 5 Lakhs only, its population has already surpassed 12 Lakhs.[pullquote align=”right” textalign=”left” width=”33%”]I pay my compliments to all known & unknown Heros of Chandigarh who brought laurels to the City by their hard work & devotion in various fields.[/pullquote]

The city was carved out of the many small villages and settlements that existed on this site. Though the city is broadly divided into sectors, some of the sites still retain their old identities. The city was inaugurated in 1952 and has grown in an organic manner since then.

The city in itself is a representation of the entire nation. It houses people from all over the country, especially from Punjab, Haryana, Himachal Pradesh, Uttrakhand, Bihar, Uttar Pradesh, etc. The strong presence of multiculturalism imparts a colourful tinge to the society of Chandigarh, which is forward looking in its ideas and still rooted with its core values.

Chandigarh is proud of its numerous residents who have contributed in their own way towards the overall development of the city over the years.

I pay my compliments to all known and unknown Heros of Chandigarh who brought laurels to the City by their hard work and devotion in various fields, a few prominent ones of whom are:

Justice A. S. Anand
A jurist and a torch bearer of human rights, the former Chief Justice of India, Justice Anand learnt the nitty grities of law in the Punjab and Haryana High Court at Chandigarh. He retired as the Chairman of the National Human Rights Commission.

Abhinav Bindra
The golden boy of the city, this young man ended India’s long drought at the Olympics by capturing individual gold medal in the 10 m shooting.

Dr. Ashok Chitkara
An exponential rise from a humble teacher to the founder of a University, Dr. Chitkara is a well known mathematician. He used to guide students for engineering entrance examination before establishing his institutions that offer services from schools to medical research.

Dr. B. L. Minocha
The octogenarian teacher-doctor and philanthropist is a virtue of self sacrifice. He provided free treatment and medicines to the needy for nearly three decades. He donated his entire wealth for charity on his retirement and proceeded on a spiritual journey of life in 2009.

D. P. Azad
The Dhronacharya of cricket, he is the coach of legendry cricketer Kapil Dev. He was awarded the Dhronacharya award by the Government of India. He still trains kids about the nuances of the game in Chandigarh.

Durga Dass Khanna
A freedom fighter and former Chairman of the Punjab Legislative Council. Late Sh. Durga Dass’s sons run a philanthropic organization, the Durga Dass Foundation, that is quite active in all parts of the city, especially in the slums of Chandigarh.

Hira Lal Sibal
The living legend of law. He has seen the Republic of India born in front of his eyes and later grow. One amongst the very few to have practiced both under the British as well as post independence Indian Legal Systems.

I. S. Bindra
The strong man of Indian cricket, he holds key positions in various cricket fora including the PCA, the BCCI, IPL and ICC. Instrumental in development of the world class cricket stadium at Mohali, Bindra made cricket popular in the region.

Irina Brar
The Golf Queen of India was born and brought up in Chandigarh. She represented the country at the Women’s International Golf Championship.

Justice J. V. Gupta
A distinguished jurist who understood the law to be for the society. A strong and dedicated RSS worker who dedicated his life for the welfare of the poor and needy. He always stood by the principles he preached.

Jaspal Bhatti
The satirist par excellence; the funny bone of the city; his spoofs inform, educate, entertain people while they also reflect the simple nuances of life. Truly, a Common Man’s Humorist.

Jeev Milkha Singh
Chandigarh born Jeev is the son of legendary athlete Milkha Singh. He is the highest ranked Indian golfer in the world.

Kalpana Chawla
From the Aeronautics Department of PEC to the biggest name in the stream – NASA, this brave woman reached for the stars and fulfilled her dreams. For her courage and determination, she remains immortal for us and for the generations to come.

Kapil Dev
The man who brought this cricket crazy nation its first World Cup. Known for his neverending fighter’s spirit, he rose from the Sector 16 Stadium to Lord’s.

Krishan Kant
A freedom fighter and former Vice President of India, represented the city in the Lok Sabha from 1977 to 1980. He was actively associated with the Panjab University and the Servants of the People Society.

Le Corbusier
The Swiss-French Architect and the man who put the Chandigarh dream into reality. He gave the world a model of urbanization, which stands unsurpassed till date.

Justice M. M. Punchi
Former Chief Justice of India, he has a long association with Chandigarh, having set up his practice as an Advocate in Punjab & Haryana High Court at Chandigarh in the year 1958. Also remained a Part-time Lecturer in the Law Department of Panjab University for some time.

M. S. Randhawa
The first Chief Commissioner of Chandigarh, he gave us the invaluable gardens that dot various parts of the city. He was instrumental in getting many artists settled in the city to give it the required human touch.

Dr. Manmohan Singh
The man who rose from the corridors of Panjab University to become a Professor in Economics, proved his ability as an economist and later became the Prime Minister of India.

Mehar Mittal
The first generation comedian of Punjabi cinema, he made people laugh while drawing out tit bits from the lives of a common Punjabi. He is closely associated with the socio-cultural institutions of the city.

Milkha Singh
The “Flying Sikh” represented India at the Rome and Tokyo Olympics. One of the finest athletes India has produced. He made Chandigarh his abode and is a part of many sports institutions.

Neelam Mansingh Chaudhary
City based celebrated theatre person, Neelam Mansingh has been associated with the Department of Indian Theatre at Panjab University. She was awarded the Sangeet Natak Academy Award for her services. She is the creator of the theatre group ‘The Company’.

Neerja Bhanot
The brave young airhostess of the Pan Airlines laid down her life saving innocent children from the bullets of the hijackers of Pan Am Flight 73. She was awarded the Ashok Chakra posthumously.

Nek Chand
The man with a Midas touch, he created the awe inspiring Rock Garden from the City’s trash. A living legend of the Indian Ingenuity.

Dr. P. N. Chuttani
One of the greatest physicians and surgeons of India, Dr. Chuttani rose from the position of a resident to the Directorship of the prestigious PGIMER.

Pierre Jeanneret
A cousin of Le Corbusier, this Swiss architect gave shape to the Panjab University and created the spectacular Gandhi Bhawan. As per his wishes, his ashes were immersed in Chandigarh’s Sukhna Lake after his death.

Poonam Dhillon
This Chandigarh girl rose to fame in the Indian Film Industry in 1970’s. She followed her celluloid dreams to give great movies like Noorie and Sohni Mahiwal.

R. K. Saboo
City based Industrialist-Socialist, Saboo is the second Indian to rise to the prestigious position of the President of the Rotary International. He has done yeoman’s service for poor children suffering from congenital heart disease. Awarded Padma Shri in 2006.

Babu Shri Chand Goyal
First Member of Parliament from Chandigarh and a thorough gentleman, under whose guidance I started my career as an Advocate in the Punjab & Haryana High Court.

Vineet Khanna
An example for the humanity to emulate, a total loss of spinal cord in an accident at the age of 17 could not prevent Khanna from doing philanthropy for the Chandigarh residents. He was also a gifted poet, journalist, teacher who promoted education amongst slum children and women. We lost him in the year 2001.

Vijay Pal Goel
A State Awardee and a plumber by profession, Goel uses his innovation & art to convert waste plastic pipes, bends, toilet seat covers and other sanitary scrap into beautiful sculptures like trains, telephones, etc. His works are exhibited at Kala Sagar in Sector 36-D.

Yuvraj Singh
Chandigarh boy has become indispensable for the Indian Cricket Team. He is known for his acumen at hitting sixes and has brought laurels for India at times when defeat seemed inevitable. 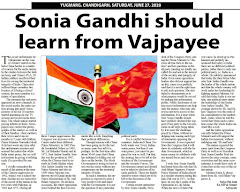 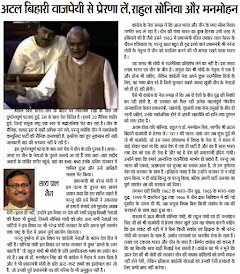 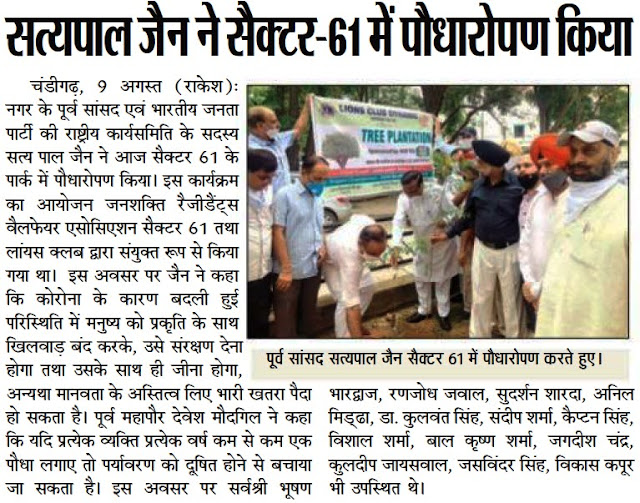 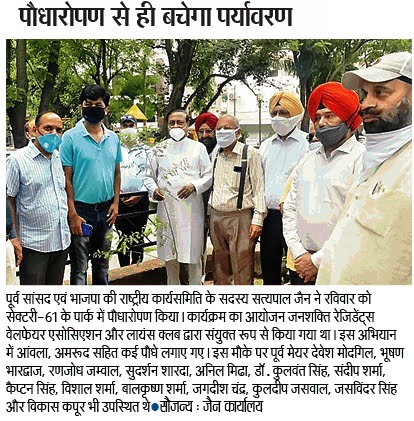 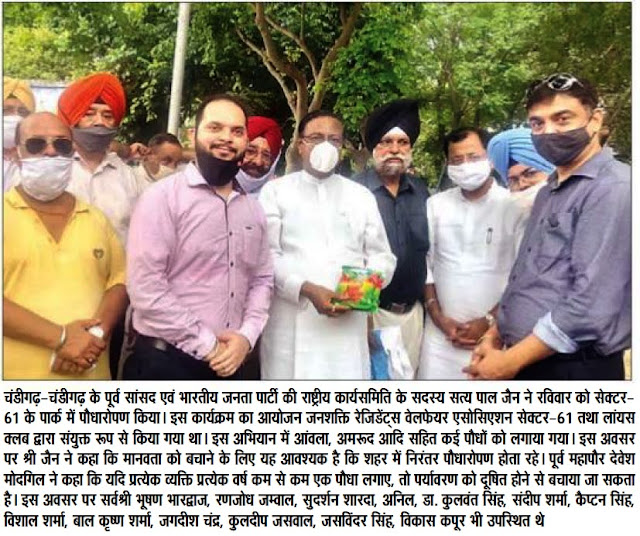 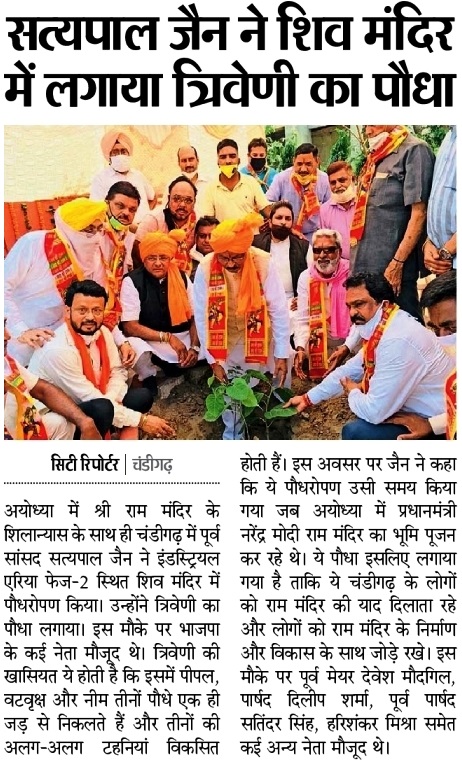 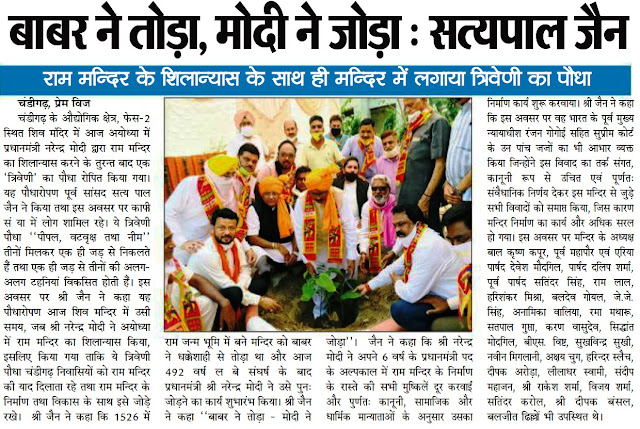